The 2016 AIAA/CEAS Aeroacoustics Conference was held in Lyon, France, from May 30th to June 1st. I attended with Joel and Dominic, who both presented papers. Joel presented a study of supersonic jet impingement on cylindrical surfaces, while Dominic presented his work on decoupling coherent and incoherent turbulent fluctuations in screeching jets. Both of them did a fantastic job, especially considering it was their first international conference, and received a lot of positive feedback (and some helpful suggestions) from the community. They also both learned a valuable lesson: when putting your presentation on a new computer, always check every slide before your talk starts! Fortunately they both recovered from their mishaps well: Joel’s videos suddenly refusing to play, and Dominic finding one figure had blown up to 1000% of its original size.

It’s the kind of thing that only happens to you once.

From Lyon, I took a flight to Berlin, to visit Dr Kilian Oberleithner, and give a seminar on experimental techniques for high-speed fluid mechanics at Technische Universität Berlin. Kilian has previously spent a year at Monash as a post-doc, and is the second author on my  Journal of Fluid Mechanics paper on jet screech.

From Berlin, I travelled to Göttingen, to visit an old friend and colleague from my undergraduate days, Peter Manovski. Pete and his family have been on a work placement from Australia’s Defence Science and Technology Group, at DLR in Göttingen, working on wind tunnel measurement techniques. I gave another seminar at DLR, this time on optical measurements in jet noise, including some of Joel & Dominic’s work. Göttingen is a major research centre and university town, perhaps most famous for being the home of Carl Friedrich Gauss, one of the most famous and important mathematicians who has ever lived. While he might have been a giant in the field of mathematics, in physical stature he was rather less so: 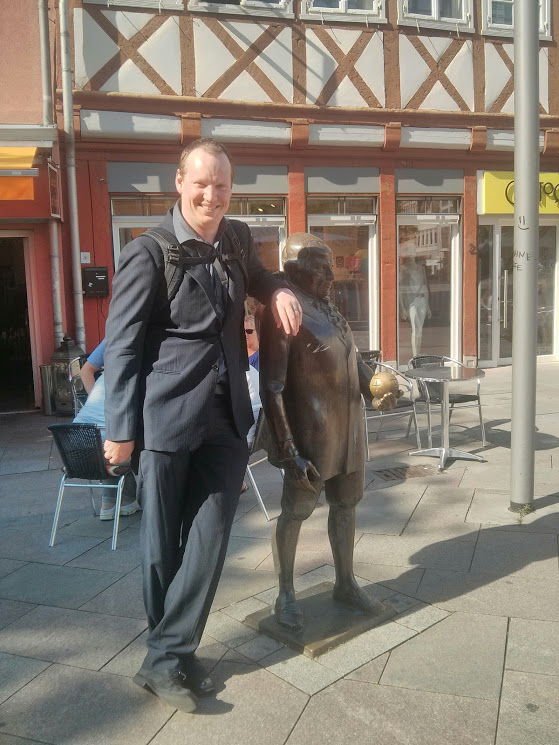 From Göttingen I headed to Cologne, to visit another DLR laboratory, where Prof. Christian Willert works. Chris has a long standing connection with our laboratory, having visited in the past, and he developed the  novel LED lighting technique that we (and many others) now use for much of our schlieren imaging. The research centre at Cologne is massive, and includes training centres for ESA astronauts, and huge laboratories across a range of fields. My sneaky photos from inside the ESA training centre mysteriously disappeared from my phone (they’re always watching), so instead you’ll have to be satisfied with this great photo from DLR’s solar thermal research facilities. As a demonstration of just how much power there is in sunlight, here is the result of a set of parabolic mirrors focusing sunlight to a point on a safe: 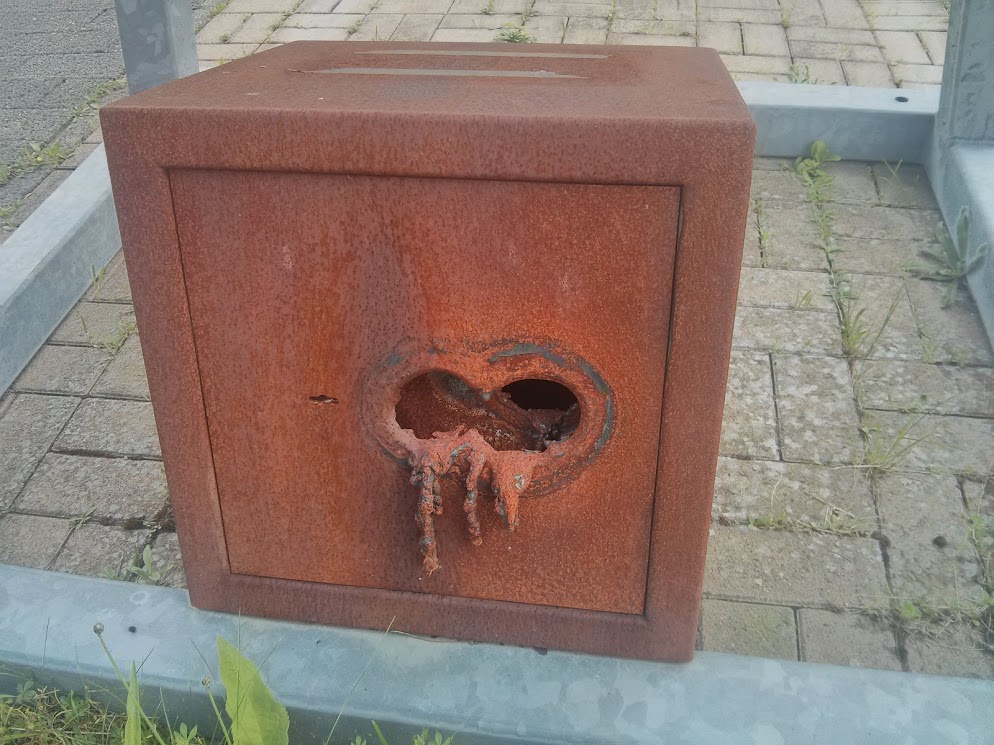 Solar thermal energy is a promising alternative to photovoltaic solar for renewable power generation. Arrays of mirrors (which are much cheaper than panels), focus light on to a tower that contains molten salt. The salt is then used to transport heat into a typical Rankine cycle (steam engine) to generate electricity.

From Cologne, I took a train through to Paris, where I was met by an old friend and colleague, Dr. Jérémy Basley, who had spent a year of his PhD in our laboratory. Jérémy helped me organize a visit to Institute P Prime in Poitiers, one of the leading jet noise research centres in the world. I gave a seminar there on my work in jet screech, and had the chance to have a chat to Professor Peter Jordan, one of the leaders in the field. Apart from being a world-recognized experimentalist in the jet noise discipline, Peter also owns and manages a bar in Poitiers, splitting time between research, teaching, and bar-tending. This probably sounds like Dominic’s dream job. Here I am with Peter, Guillame and Vincent outside Peter’s bar in Poitiers: 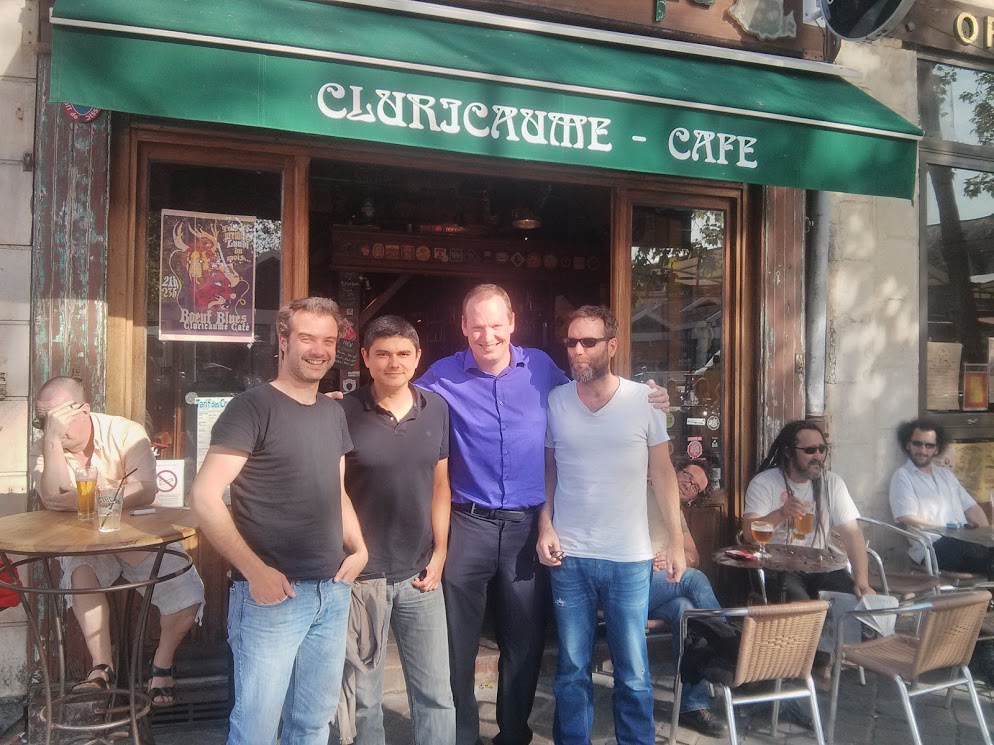 As a last stop, I visited Jérémy’s alma mater, LIMSI, and gave a seminar on our research in both asthma and jet noise. To finish up I snuck in a day or two of sightseeing in Paris with Jérémy, including stopping for crepes in Montparnasse: 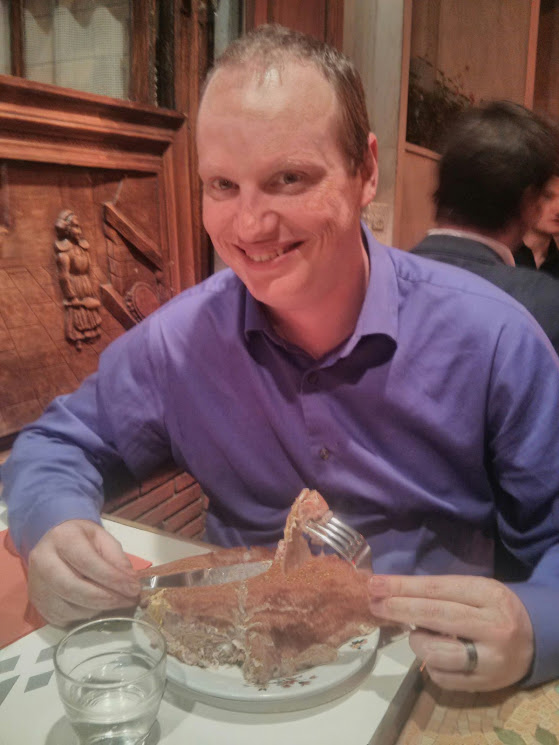 After a weekend in Paris, it was time to return home, to spend a single weak with Laura before heading off for my next work trip. Joel took the opportunity of the conference to see a little bit of Europe with his wife, and we met up to catch the same flight home: 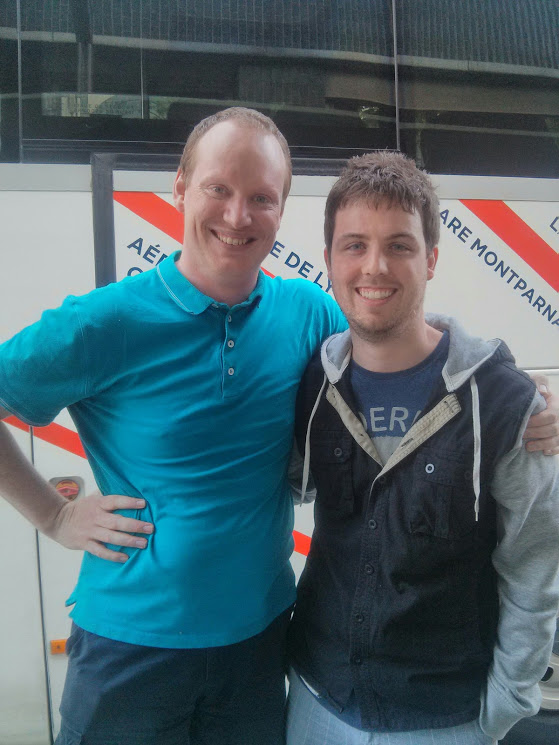