In June I attended the AIAA Aeroacoustics conference in Denver, accompanied by Joel, Dominic and Graham, who were all presenting work that forms part of their PhD candidature.

Dominic presented work based on his time spent at Queen Mary University of London with Professor Sergey Karabasov, combining analysis of some my experimental data with the shock noise models developed at QMUL. 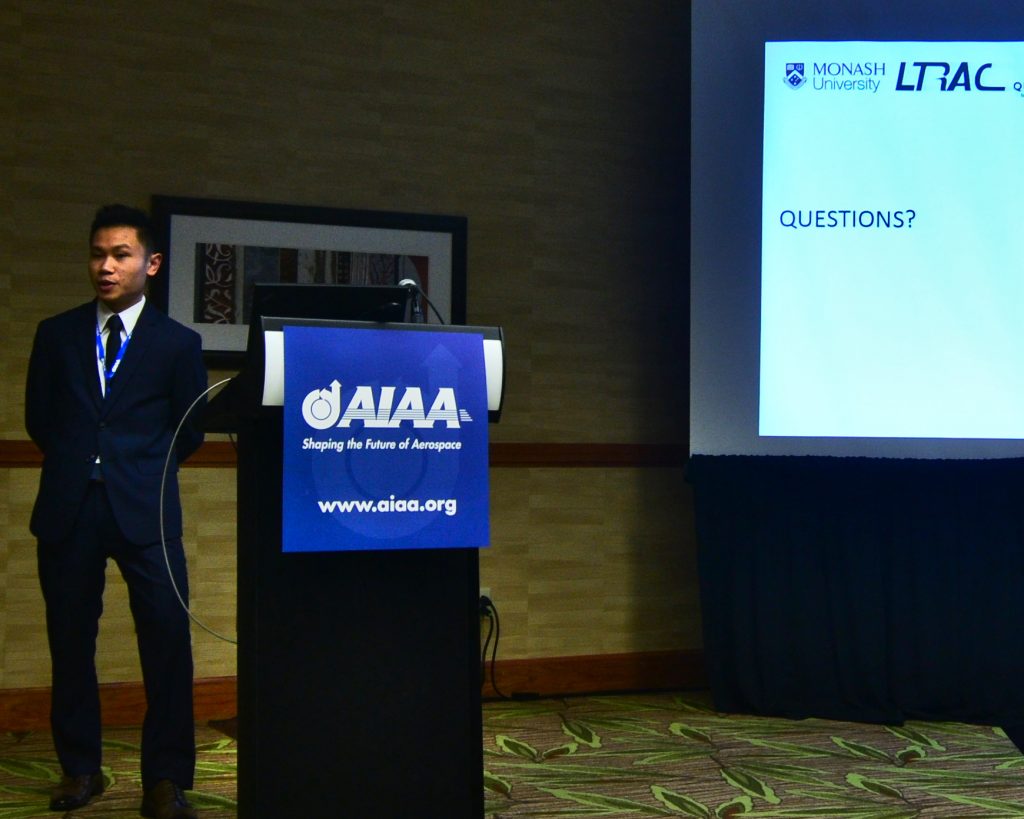 Joel presented on his efforts to isolate different feedback mechanisms in supersonic jet impingement through analysis of experimental data: 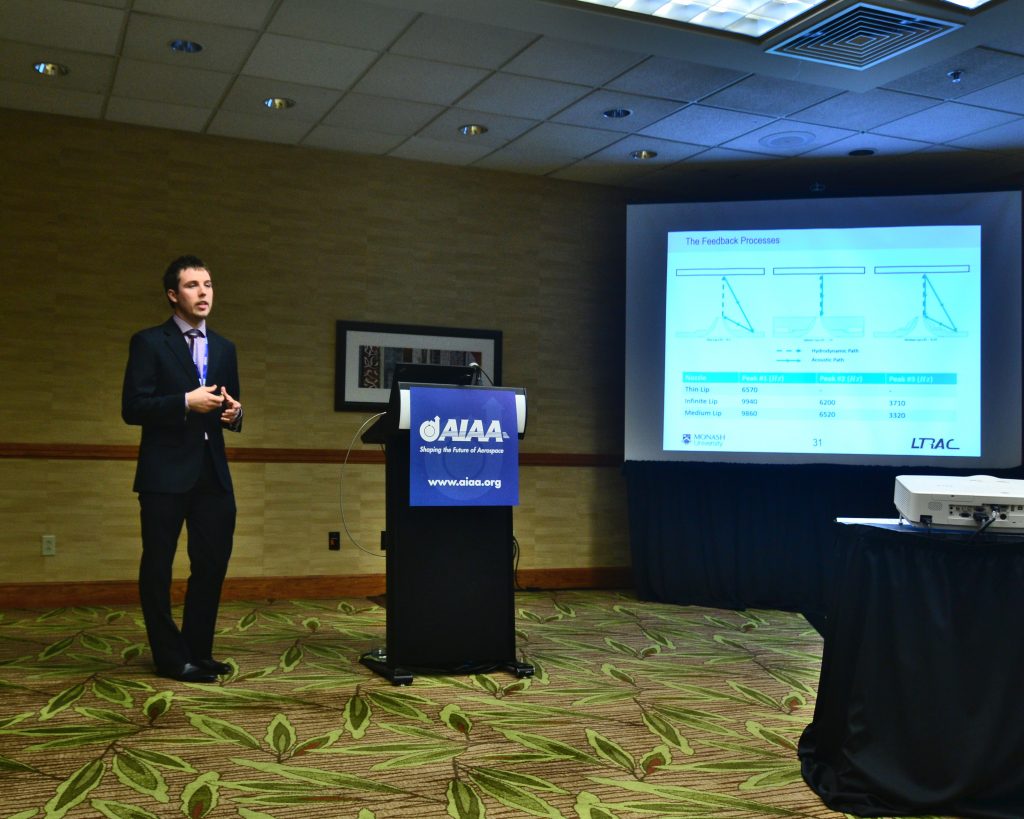 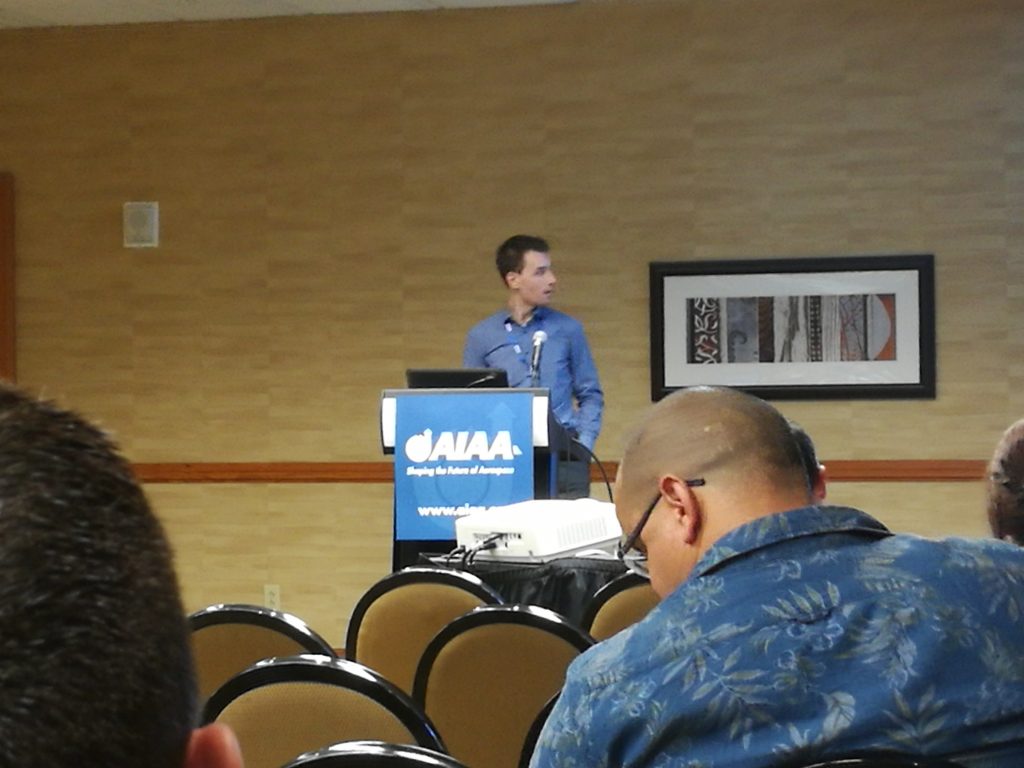 At the end of the conference I spent the weekend in Colorado before my next stop in Ohio, and we made the most of the opportunity to see some of the incredible natural parks that surround Denver: 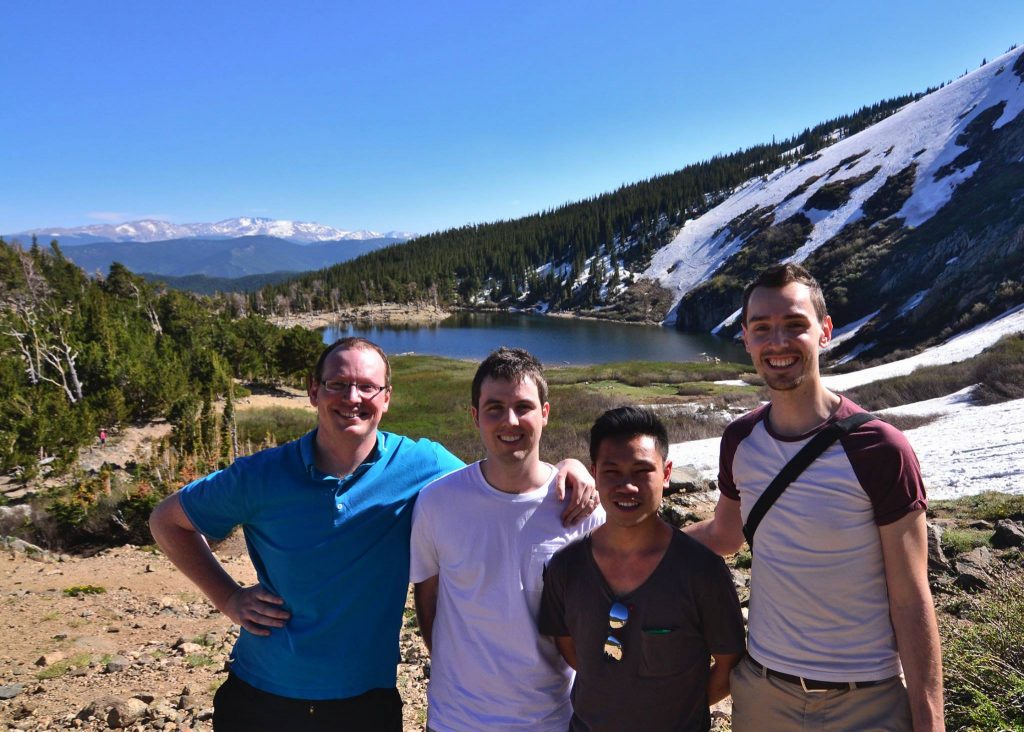 Here are the four of us at St. Mary’s Glacier, an hour or two out of Denver. 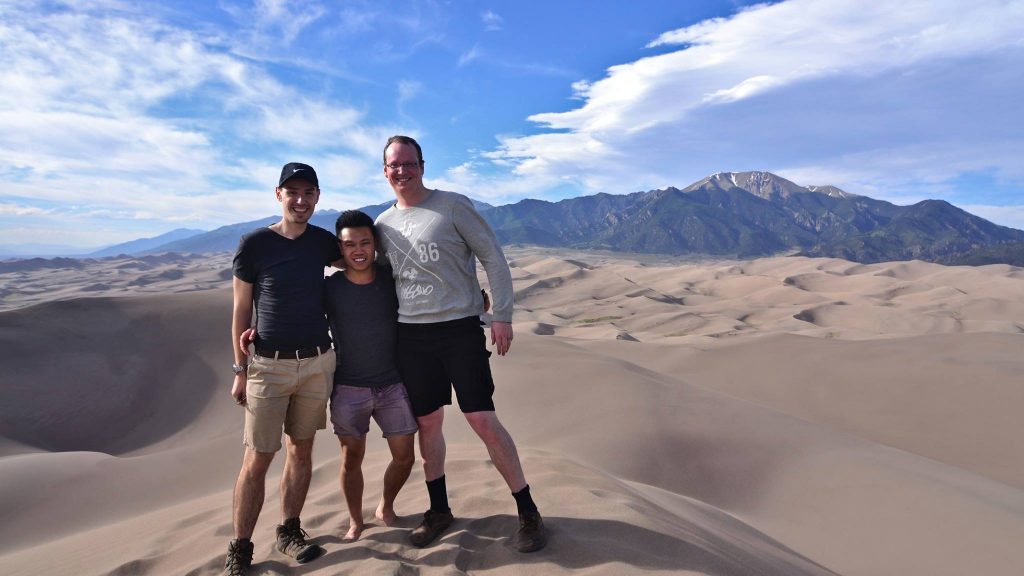 Here we are at the top of High Sand Dune in the Great Sand Dunes National Park, about three-four hours southwest of Denver. A truly remarkable place, even with those mountains towering over us in the background, we were already higher than the peak of the highest mountain in Australia. In my old age and poor fitness I found the climb quite challenging, but fortunately this was more than made up for by the opportunity to run back down the dunes.

From Denver I flew to Ohio, and after a brief stop to see my in-laws across the border in Kentucky, I drove to Cleveland to visit Dr. Khairul Zaman, Dr. James Bridges and Dr. Brenda Henderson at the aeroacoustics branch of NASA Glenn. Getting to visit NASA (in a work capacity) was the realization of a lifelong dream, and it met every expectation I had. Namely, a bunch of very old and unimpressive looking brick buildings from the outside, with jaw-dropping facilities inside. Sadly I was not allowed to take photos inside the facility, but using NASA’s own material I can provide a few highlights:

I got to go for a walk inside the 8’x6′ supersonic wind tunnel. It is difficult to convey the magnitude of such a statement, but by way of comparison, Tom Knast is building a supersonic tunnel with a working section of 80mm x 80mm for his PhD, and this is not a small undertaking. The NASA tunnel has a working section of 2438mm x 1829mm. It is large enough to comfortably stand in, and walking through it takes several minutes. Sadly the quiet supersonic demonstrator aircraft model had been taken down before I saw it in situ, but this did little to diminish the experience.

Here one of NASA’s photos gives a sense of the scale of the text section in the tunnel. The perforations on the wall are to allow for boundary layer suction. 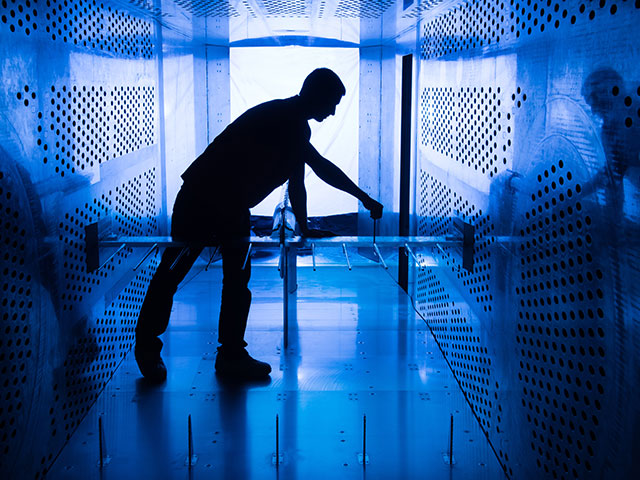 Here is the model of the QueSST installed in the tunnel, which was removed a few days before I arrived. 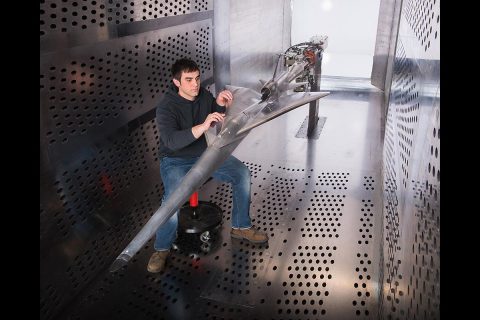 After the tour through the tunnel, Dr. Zaman showed me many of the facilities on which the foundational research in jet noise was performed, including the work done by J. Panda, G. Raman, and other luminaries of the field. Perhaps the highlight though was the visit to the Aero-acoustics Propulsion Laboratory, which includes a 30m high geodesic dome entirely dedicated to large-scale jet noise testing: 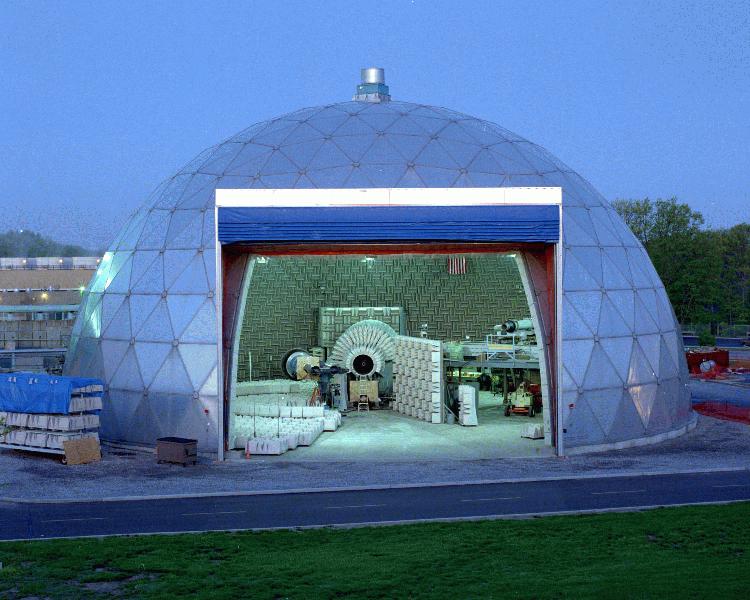 It is difficult to get a sense of scale from these photos; despite having seen them for years, I was not prepared for the immensity of the facility. A close up photo of the small jet rig (to the left of the main jet in the above image) may give some sense of perspective: 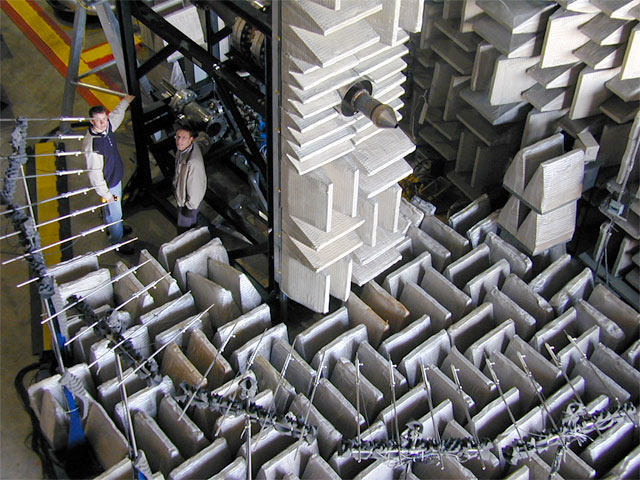 I had the opportunity to give a seminar on our own research on jet noise, which I am thrilled (and surprised) to say was very well attended (though this was largely due to the many interns and students who had little say in the matter). Getting direct feedback from Dr. Bridges, Dr. Henderson, and Dr. Mark Wernet, arguably the worlds most experienced supersonic jet experimental researcher, was a fantastic opportunity. Sadly there are only so many hours in the day, and thought I might have happily stayed forever, I had to take the one photo that was allowed to me (outside the security checkpoint) and return to my hotel: 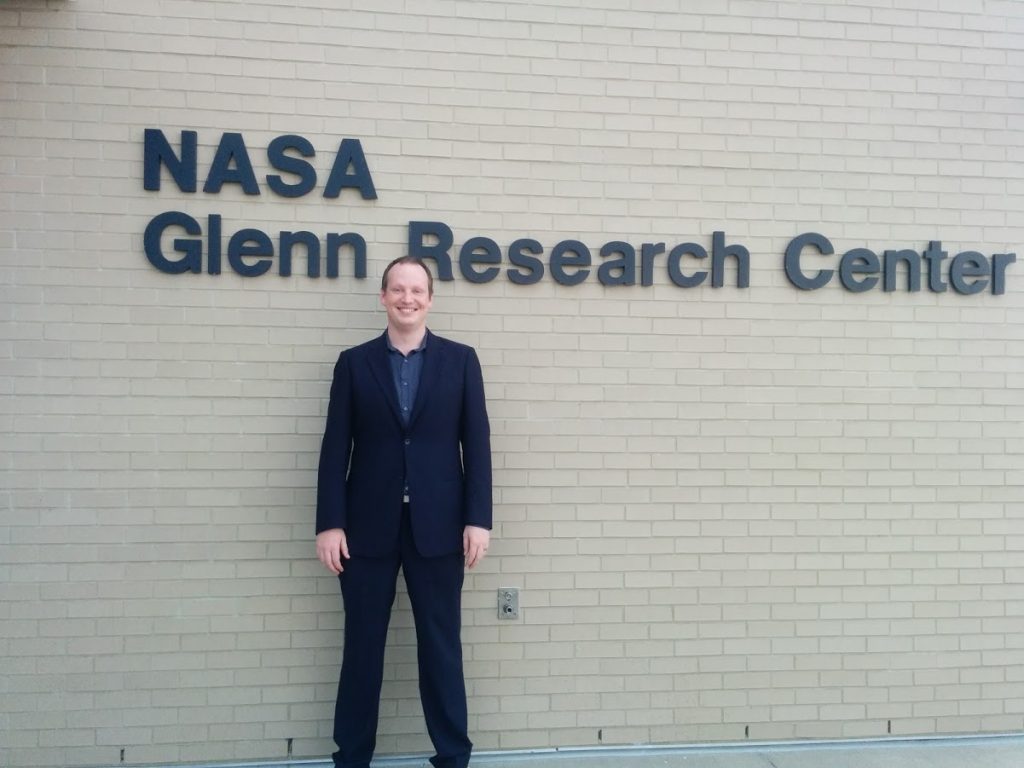 From Cleveland I drove to Columbus, to visit Professor Mo Samimy, head of the Aerospace Research Center at the Ohio State University. The original plan had Graham working at the Center for a month or so following the conference, but in happy news for them, and less so for us, both Mo’s student and postdoc on the twin jet project had found jobs within the space of a week, leaving nobody to staff the facility. Graham will hopefully return later in the year. The Aerospace Research Centre is phenomenally impressive, boasting one of the largest collections of aerospace research facilities you would ever expect to find outside of a major government research centre. Professor Samimy has pioneered a form of plasma based flow control, and this unique approach to controlling fluid instability is applied to a wide range of problems at OSU. We are hoping to work more closely with Prof. Samimy on this promising active flow control technology in twin jet systems in the coming years.

Following the OSU visit, it was time to return home and mark exams (and see Laura, of course).