Working together with colleagues Vincent Jaunet and Peter Jordan at Institut P’ in Poitiers, and Aaron Towne at Stanford, we produced experimental evidence that the upstream-travelling component of jet screech is a neutral acoustic mode of the jet itself. This is the first experimental confirmation of a theory proposed almost thirty years ago (though it was recently demonstrated by another team using Large-Eddy Simulation).

Our paper with this finding: Upstream-travelling acoustic jet modes as a closure mechanism for screech was published in the Journal of Fluid Mechanics (Rapids), and an image of data produced by Vincent was chosen for the front page of the issue: 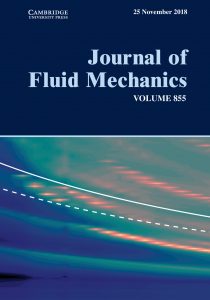