Jet engines are noisy. That’s not really news to anyone. What you might not realize though, is that they are much quieter than they used to be. This is the result of many years of research in aeroacoustics – we now have a pretty good idea what factors make engines noisier. The majority of the noise doesn’t come from inside the engine, it comes from the exhaust – the hot, high-speed gas jet that comes out the back. By changing the parameters of this jet – its velocity, Mach number and temperature, we can change the volume and frequency of the noise it produces.

While we’ve seen a reduction in noise, we’ve mostly achieved this by slowing down the jet exhaust. This has limited the performance of our engines. If we want to start flying faster, for less fuel, we are going to need faster exhausts on our engine, which means more noise.

Jet noise isn’t just a source of irritation for people on board, it’s actually a public health issue. Research has shown that exposure to jet noise (by living under a flight-path) correlates with significantly increased risk of heart-disease, stroke, and other illness. Defense personnel working with high-speed aircraft are exposed to elevated levels of noise, putting them at risk of hearing damage (this is a particularly severe problem in the US Navy for aircraft carrier deck crews).

Noise restrictions also limit the operating hours of airports, which means increased congestion problems in the air. Cramming more flights into a shorter period means more time is spent in holding patterns. As well as being frustrating for passengers, this results in a whole lot of extra fuel being burned. It has been estimated that aircraft sitting in holding patterns at Heathrow airport produce 300,000 tonnes of additional CO2 per year.

So jet noise is a public health issue, and also a sustainability issue.

How it Works – The Sources of Jet Noise:

Jet noise is produced by a number of different mechanisms. Their relative contribution is a function of the operating conditions of the aircraft.

Common to all turbulent flows is the production of noise by turbulence itself. The faster the flow, the more noise the turbulence produces, in fact the sound intensity scales to the eighth power of Mach number – so things get much louder as you go faster!

The theoretical framework for the prediction of turbulent mixing noise was established in the aeroacoustic analogy of Michael Lighthill. With sufficient information about the nature of turbulence in the flow, we can do a reasonable job at predicting the noise it will produce. However, as discussed on the How It Works page, obtaining that information about the turbulence can be very difficult. Part of our research focuses on measuring the properties of turbulence in complex, shock-containing jet flows.

As well as the noise produced by the turbulence itself, the rapid convection of large turbulent structures down the shear layer (i.e. the edge) of the jet can produce a particular noise signature. If these big vortices travel at a supersonic speed relative to the ambient air, they can produce what is termed Mach Wave radiation. Mach wave radiation is visible in the schlieren image from our work below, radiating at roughly a 40 degree angle from the direction of the exhaust. 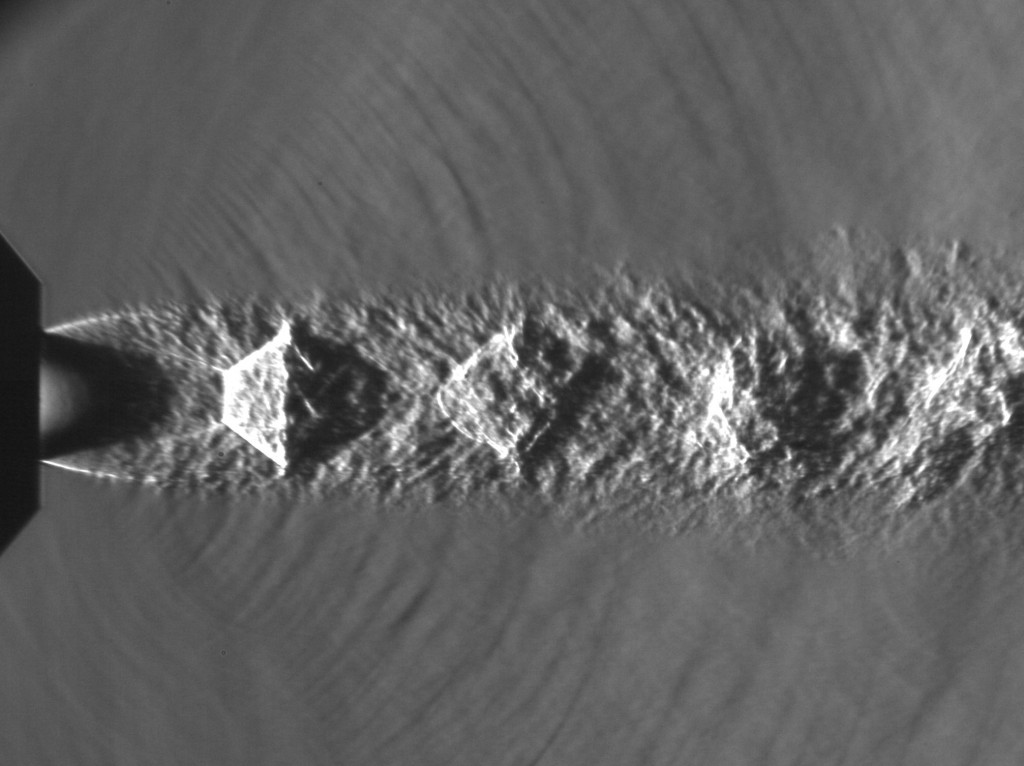 Once the exhaust of the jet starts moving above the speed of sound, shockwaves can form in the exhaust, which produce additional sources of noise. The primary focus of this research project is on a particularly complex aeroacoustic process called “jet screech”. Screech is a closed-loop feedback process that operates as follows:

If this sounds complex, that’s because it is! We’re talking about turbulence, acoustics, gas-dynamics, receptivity processes, and various other challenging problems, all wrapped up into one. Why do we care about it? Well, the sound produced by screech is extremely unpleasant: rather than the usual roar of a jet engine (which is unpleasant enough), screech produces an extremely loud high pitched whining sound.

Luckily, on most large scale engines, screech isn’t too much of a problem. Where it is a problem though, is when we have two engines close together (as many high-speed aircraft must). The screech from the two engines couples together, greatly magnifying the effect. The sound can in fact be so intense that it damages the aircraft itself!

My research seeks to better understand the fundamental mechanisms of screech, as well as develop new ways of suppressing it. If we can learn to control these noise mechanisms efficiently, it will help pave the way for supersonic civilian transport to return to the skies. As Australians, we stand to benefit more than anyone by a return to travelling beyond the sound barrier.

Through our application of advanced experimental techniques, we’ve been able to shed new light on a number of aspects of supersonic jets.

See our paper in the Journal of Fluid Mechanics for the first experimental confirmation of the means by which the shock-vortex interaction produces the screech tone.

See our paper in Physics of Fluids for a discussion of  shock structures within the supersonic jet.

See our papers in the American Institute of Aeronautics and Astronautics Journal, Experiments in Fluids, and the International Journal of Aeroacoustics for a discussion of elliptical jets and the means by which they alter the sound production in supersonic jets.

See our papers in the International Journal of Aeroacoustics and the Journal of Visualization on nozzle lip modifications for sound suppression. 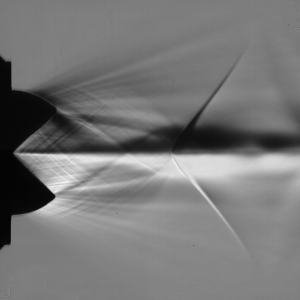 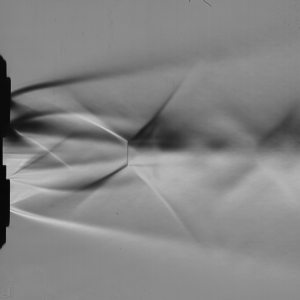