The impinging supersonic jet – a flow of critical importance

When a supersonic jet strikes a surface, an already complicated problem gains a new degree of complexity. Supersonic impinging jets have complex fluid-shock interactions, aero-acoustic feedback processes, and are highly turbulent. Despite the challenge, these flows are well worth studying, as they have a broader range of applications than you might think.

Supersonic jets are already loud. Fire them against a surface and they get a whole lot louder. How loud? Well, for an example of how intense the sound produced by supersonic jet impingement can be, during the operation of the Space Shuttle, NASA employed a special sound suppression system on the launch pad, dumping water onto the launch pad at a rate of 900,000 gallons per minute. See a demonstration of the system in action here:

Many years ago, while performing some laser diagnostic measurements in supersonic flow, some Soviet researchers stumbled on a new spray coating technique, quite by accident. After performing some supersonic wind tunnel tests, they found their model had a strange new surface coat. Though they didn’t know it yet, this was the start of the Cold Gas Dynamic Spray, or Cold Spray, technique.

Cold spray works by accelerating a stream of metal powder in a supersonic air jet, then spraying it against a surface. If the speed of the flow is tuned correctly, rather than abrading the surface, the metal powder will actually bond with it, creating a new surface. As the name suggests, cold spray can be done without heating the metal to melting point (though some heat is still typically applied), meaning the spray technique can be applied to temperature sensitive systems without fear of damage.

Cold spray is now finding wide use in industry as an additive manufacture and repair technique. An example of this coating process is visible in the below video, from Cold Spray / Plasma Giken. 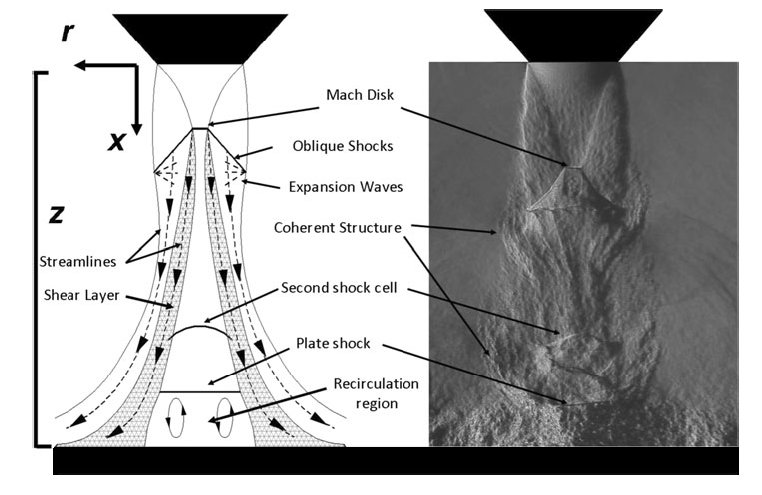 There is an awful lot going on in the supersonic impinging jet. The above image compares a schematic on the left with a schlieren image on the right. If the jet is still supersonic when nears the plate, a plate-shock will be formed. The impinging jet forms a feedback loop very similar to the screeching jet, though with some key differences:

Check out our paper in the Journal of Visualization, using ultra-high speed schlieren to visualize the aeroacoustic feedback loop in supersonic impinging jets for the first time.

See our paper in the journal Shock Waves, for an investigation of the effects of surface geometry on the structure of the impinging supersonic jet. 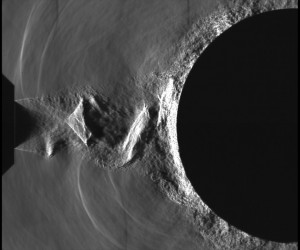 See our paper in the 2015 Australian Laser Diagnostics Conference for an introduction to the effects of nozzle lip geometry on the instability modes of the impinging supersonic jet.

Watch this space, as this project is just getting started. I’ll have more results to share with you soon!